Michael has been involved in the lifestyle sports industry both personally and professionally for over 20 years. An Ironman Triathlon Finisher, Michael has competed in numerous endurance events, including triathlons, mountain bike races and adventure races. A graduate of Drexel University in Philadelphia, he started his career in Operations and Production Management in the Offshore Oil and Recording industries. Michael started MESP, Inc. after producing the first Malibu Triathlon as a hobby. He also enjoys hobbies such as swimming, cycling, scuba diving, hiking and riding dirt bikes with his son.

Blake graduated from University of Florida with a BS in Sports Management and Minor in Business Administration. He lives in Los Angeles, CA and has been working in the sports event field since 2006 planning a variety of tournaments all over the USA. Blake enjoys being outside, active and playing team sports.

David grew up in Michigan and graduated from Saginaw Valley State University with a BS in Business Administration. He recently moved to Southern California to pursue his career in Marketing. He enjoys sports and watching college basketball. 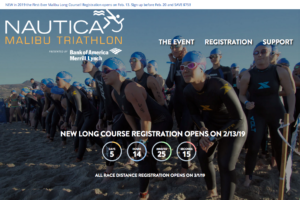